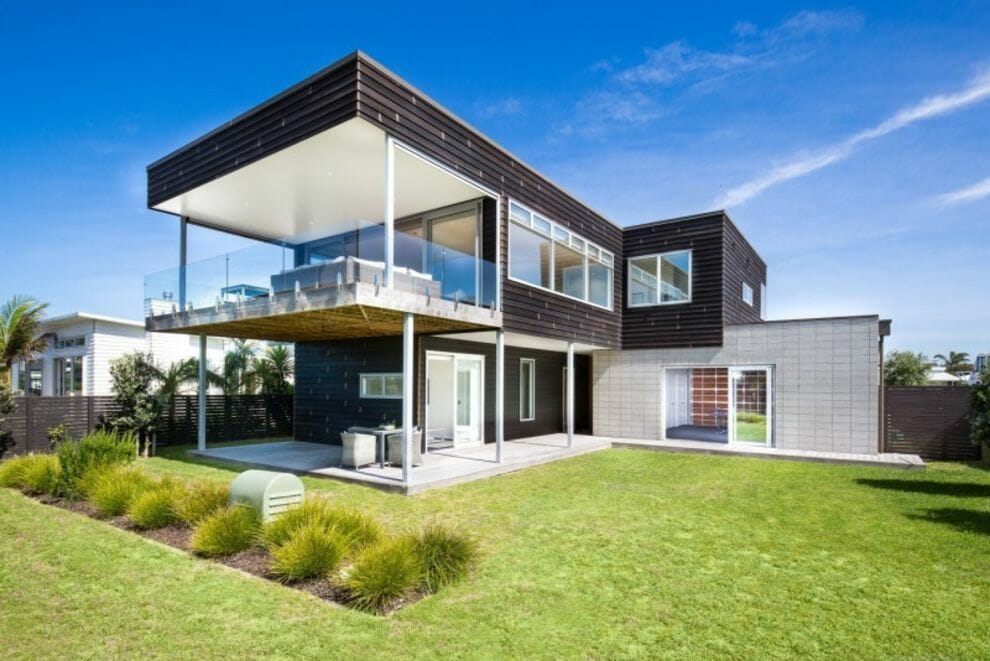 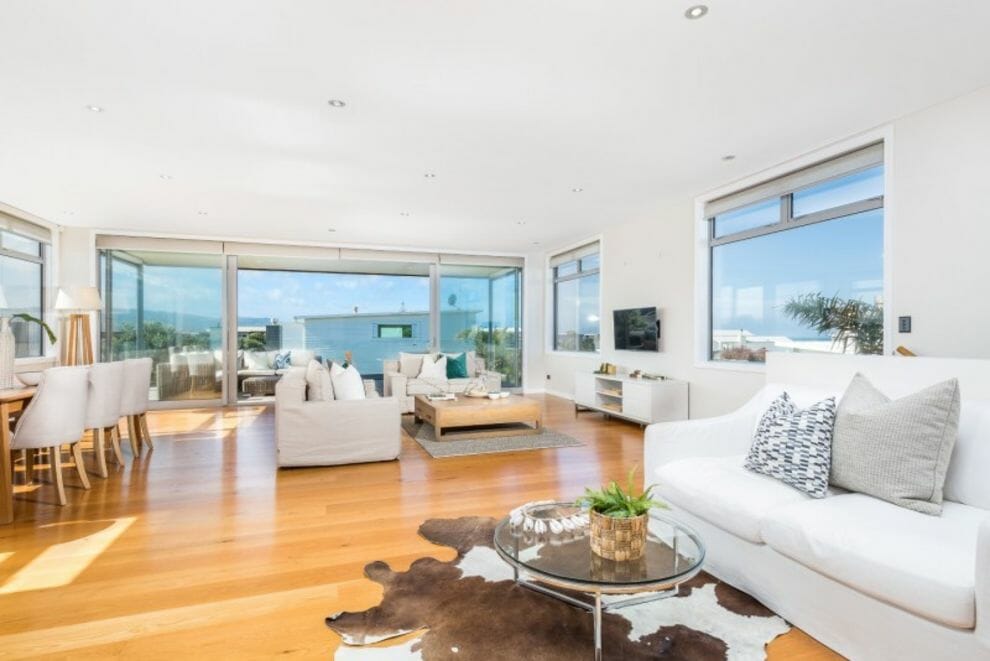 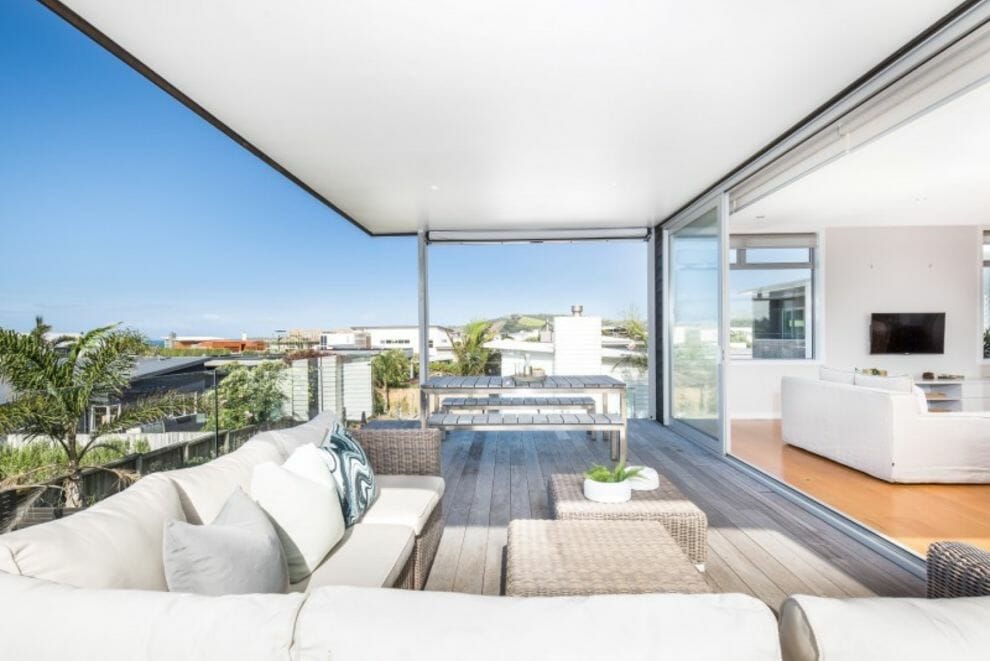 Investors are back in a heated Auckland property market and rapidly rising house prices are fuelling the fire.

A summertime dip, after tax and loan-to-value ratio (LVR) changes were introduced last year, appears well and truly over.New figures show the median price of the more than 3000 houses sold in the region last month surged $70,000 to $820,000, the first time it’s broken $800,000.

Investors accounted for 44 per cent of the sales and one in three properties went for more than $1 million.Experts now say predictions the market would cool were premature, as investors found ways to circumvent controls.

“Recent fears of the Auckland market cooling have been overstated, as median prices across the city have rebounded during March,” institute chief executive Colleen Milne said. “The slowdown in sales volumes after the introduction of tax and LVR changes last year appears to be coming to an end.”

Elsewhere in New Zealand, price also rose. Otago, Northland, Manawatu/Wanganui, Wellington and Waikato/Bay of Plenty all showed in excess of 25 per cent annual sales growth, REINZ said. The national median house price rose $20,000 or up 4.2 per cent to $495,000 annually.

In Auckland, the LVR changes demanded investors stump up 30 per cent deposits. Everyone else needs to raise 20 per cent. A capital gains tax of sorts was introduced for those hocking off fast-appreciating investment properties within two years. 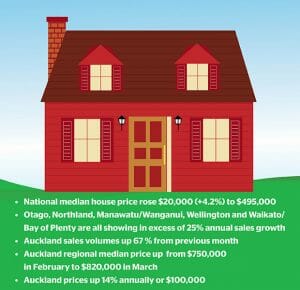 The market’s rise from its summertime slumber comes as no surprise to economist Shamubeel Eaqub. “This is when you would expect to see the new regulations being tested,” he said last night. “It will be around six months for these new regulations to work through the system. That’s what we saw with the first-home buyer restrictions put in place a little while ago.” People were learning how to work around the restrictions, he said.

National needed to take “meaningful action” and “embark on a massive state-backed building programme to flood the market with affordable homes”, Mr Twyford said. He also called for planning-rule tweaks and a ban on overseas speculators.

Building and Housing Minister Nick Smith said figures for Auckland had been volatile recently. Ideally, the government would like to see year-on-year growth in the single figures for percentage points, as was the case earlier this year.

“I’m hesitant to draw conclusions on the basis of just one month’s data,” Dr Smith said. “It’s certainly clear that there was much softening in the latter part of 2015.”

The minister said he hadn’t seen any evidence to suggest buyers were finding ways to work around measures introduced last year. The comments come as Auckland Council revealed it received a record 23,220 consent applications, up by 12 per cent.

Most property in Auckland is being picked up by “multiple property owners”. CoreLogic data issued by QV shows that sector accounted for 44 per cent of all sales. First-home buyers were involved in 21 per cent of purchases.

Investors were seeing good returns, said QV Auckland spokesman James Wilson. “Historically, Auckland’s been able to provide that.” Lower- and mid-price houses were experiencing growth and there was interest in Manukau and Papakura, where investors and first-home buyers were effectively competing.

Meanwhile, the institute revealed that one in three properties in Auckland went for more than $1 million last month. Mr Wilson said it was simply “a numbers game”. “When the market keeps moving the way it’s moving, you’re going to get to a point where areas get tracking over $1 million.”

The number of house sales in Auckland in March was close to double the sales in February, according to figures released by the city’s largest real estate agency. Barfoot & Thompson figures showed 1341 sales in March, an increase of 92.1 per cent from February, when 698 houses were sold.

Managing director of Barfoot & Thompson, Peter Thompson said March was consistently one of the busiest sale months of the year. While the number of sales increased from February, there were 16 per cent fewer sales than March 2015.

The median price of sales was $798,000, a 12.2 per cent increase from March 2015 and an 8.1 per cent increase from the month before. “When prices are this strong in March the trend is for prices to hold steady through the year,” Thompson said. “As it has been for the past two years, lack of supply remains the main price driver.”

There were 1874 houses listed for sale in March, 9 per cent fewer than in February and 6.2 per cent fewer than March 2015. Barfoot & Thompson’s data was released the same day the latest Massey University Home Affordability Report found Auckland continues to be the least affordable place in New Zealand to buy a home.

According to the report, Auckland remains a staggering 59 per cent more unaffordable than the rest of the country. This is despite recording a 3.1 per cent improvement in affordability for the third consecutive quarter.

But she warned the improvement offered limited respite for first homebuyers in Auckland. “Despite the small improvements we’ve seen over the past few quarters, Auckland remains 59 per cent less affordable than the rest of New Zealand – and that is a record high. The only other region that is more unaffordable than the national average is Central Otago Lakes, at 48 per cent,” said Dr Flint-Hartle.

The report, which covered the period from December 2015 to February 2016, showed a 9.2 per cent annual improvement in affordability across New Zealand continuing the trend of the past three quarters.

The only region to buck the trend was Central Otago Lakes where a 10.5 per cent improvement in housing affordability was reversed over the past six months.